People living in the west continent embraced their first King St.Ascaron. From then on, the west continent was named Ascaron Continent. St. Ascaron the wise led his people exploited and explored in the harsh environment with incredible will. Throughout the following hundreds of years, with many kings’wise leadership, people of different races supported each other and finally built up a joyful land in the central plain. However, peace is always too short, or to say that the peaceful days are too long. Conflicts between races gradually came out. For the sake of profits each tribe became hostile and the conflictions leveled up. 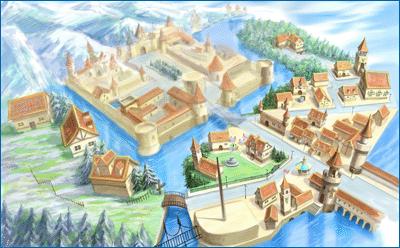 Ascaron Calendar A.D.1023, conflictions between tribes and races finally broke out. Ascaron royals collided with the Morpheus tribes who were considered as ‘physically developed, mentally simple’. The Morpheus tribes, who have been living at the bottom of the society, invaded the royals’ territory furiously. Then the war broke out and finally turned into a big catastrophe swept out the whole Ascaron Continent. This year is named as “Bloody Red 1023”.

Following is the record from the “Ascaron Empire History”:

Three inferior Morpheus intruded into the imperial hunting ground of Infante Hugh Master for assassination. They were captured and sentenced to death according to the Law of the Empire. In the spring of 1023, the Morpheus tribes defied the sentence and gathered an army of 3,000 and invaded the territory of Infante Hugh Master, thus led to the rebel war. This war signified the ending of the golden times on this continent. Facing the brutal enemies destroying homeland, our Empire soldiers fought bravely and finally defeated the Morpheus tribes. It was a cruel and violent battle that the whole continent was imbrued bloody red. It was terrifying. Every drop of rain in this year was bloody red. Therefore, this year was named “Bloody Red 1023”.

Morpheus was considered as a very inferior race. Some tribes even thought that the only difference between them and the animals is that they possessed one language while the animals didn’t. As a matter of fact, the Morpheus indeed could communicate with animals. Some of them even can summon a few horrible creatures. Before Ascaron Calendar A.D. 1023, people generally thought this race as docile and a little stupid.

Young Morpheus are shorter than human beings, normally just able to reach the chest of human. But when they come to the age of 40, which is adulthood for them, they become very muscular and much stronger than human. When in battle, human mostly feel like they’re fighting with demons. Therefore Morpheus are also nicknamed as the Demons.

Nowadays, the Demons are living on a big island on the north Ascaron Continent. The big island, named the Isle of Demon by Ascaron Continent people while the Morpheus name it as Isle of Morpheus. The Demons build up their own country on the island. They build a magnificent city in the center of the island, known as Abddon Capital.

Children in Abddon Capital have heard another story from the Morpheus presbyters:

The winter of Ascaron Calendar A.D. 1022 was one of the few harshest winters on Ascaron Continent. The Morpheus, at that period was the lowest class on this continent, lived an extremely hard life. According to the social system of that time, due to the common sense that Morpheus people are inferior, the Law said that Morpheus can’t engage with priesthood, can’t be investitived any rank of nobility, can’t occupy any rank above captain in army, can’t possess belongings over 100G. So, in such rigorous winter, the life of Morpheus is hard to imagine. By the beginning of spring, 1023, the belly-pinched Morpheus had no food any more. Therefore, all men and children were mobilized to find food.

At that time, four Morpheus kids have mistakenly entered into the hunting ground of Infante Hugh Master when they were collecting wild fruit. As it happened, after having a big feast the Infante came out for hunting. While in drunk, he took a ragged child as a prey and shot him with an arrow. The cry for help from the scared kids frightened Infante. He fell down from his horse. He was irritated and ordered his soldier to capture the three kids. Ignoring the kids’ plead of curing their wounded fellow, the Infante swaggered off, leaving the almost insensible injured kid to wait for death.

However, the injured kid did not die immediately. He struggled and grabbled back home to report the situation. To rescue those three kids, Shaikh lead 30 of his clansmen who did not go out seeking for food due to their old age or wounds. They just wanted to apologize to Infante and take the kids back. However, when they arrived the Intante’s territory they could only find the three kids had already been killed in the name of assassination. The angry Morpheus fought with the Infante’s guardians. During the chaos, Morpheus Shaikh was killed by the guardian leader Mist Lubi.

Losing Shaikh, the Morpheus raged. Quickly the news reached the Morpheus outside that over 20 of those who went to Infante territory had been killed and only few escaped. After seeing relatives die tragically, Morpheus lost their minds. They swarmed into Infante’s territory from far and near.

Soon afterward the territory was full of roaring. They shouted the slogan of revenge and burned all the architectures and killed all human beings they can see. When they entered the castle they found that the Infante had already run away through a secret path. But he did not take his loyal servant Mist Lubi whose body was found in the remains of the castle.

Afterwards, Infante called on troops and began the war of suppressing rebellion. This war finally turned out to be a disaster and swept the whole Ascaron Continent. Though at the end the Morpheus people were driven out of Ascaron Continent, tribes and races on this continent began to meditate.

By the year Ascaron Calendar A.D.2000, Ascaron Empire has finally divided into three countries, heading toward their own different ideals.

The information above origniates from the public http://www.talesofpirates.com web site and has been displayed here unaltered.

Retrieved from "https://talesofpirates.fandom.com/wiki/Storyline?oldid=2708"
Community content is available under CC-BY-SA unless otherwise noted.